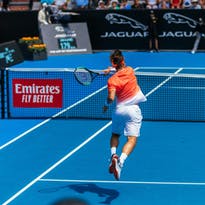 We’ve kicked off the tournament with engaging activities for fans, including tennis clinics with the sport’s legendary players. We have also hosted a number of guests in the Emirates Luxury Suite, including celebrities such as Jason Sudeikis, Olivia Wilde, Jessica Biel and Naomi Campbell, as well as tennis greats Michael Chang, Rod Laver, Mats Wilander and Billie Jean King.

As part of our agreement with the ATP Tour, which was first signed in 2013, we became Premier Partner of the ATP Tour, as well as Official Platinum Partner of the season-ending Nitto ATP Finals. With global marketing rights and exposure through iconic on-court net branding at 60 tournaments worldwide, we are able to engage with tennis fans around the world and showcase our unrivaled hospitality.

The two-week Dubai Tennis Championships is hosted in late February and early March, with the first week being the women’s tournament and the second week the men’s tournament. It is an important event for the elite tennis players with it holding Masters 500 status on the ATP Tour and a Premier Event on the WTA Tour.