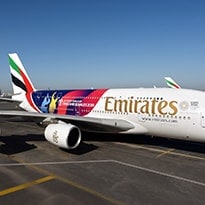 Durham Dynamos is one of the leading teams in the Twenty20 format of the game, which has seen a massive growth in popularity in the UK in recent years. The association with Durham Country Cricket Club provides Emirates with a platform to engage cricket fans across the UK and especially in the Northeast of England, an important region for Emirates with its daily flights from Newcastle.

The world-famous cricket ground has been the home of the Lancashire County Cricket Club for more than 150 years. And with the naming right partnership, we also became the shirt sponsor of Lancashire’s NatWest T20 Blast team, who won the title for the first time in 2015.