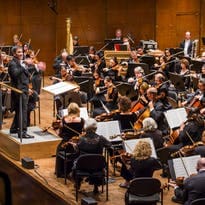 In its long history, the San Francisco Symphony has presented more than 230 world premieres, commissioned almost 100 new works, and received countless awards for its adventurous programming and commitment to American music.

As one of the Middle East's premier music festivals, the Emirates Airline Dubai Jazz Festival attracts over 30,000 visitors to two stages spread across the Dubai Media City Amphitheatre, with over 12 performances featuring more than 120 international artists. In recent years, the Emirates Airline Dubai Jazz Festival has seen performances from artists as diverse as John Legend, David Gray, ELO, Freddy Cole, Kool and the Gang, and James Blunt.

We’re proud to be associated with Dubai’s critically acclaimed hit music festival, RedFest DXB. Launched in 2014 with headliners The Lumineers and Jessie J taking to the main stage, the festival is set over two days every February at the Dubai Media City Amphitheatre. In the last five years we’ve been graced by such talents as Demi Lovato, Sean Paul, Mike Posner, The Script, G-Eazy, Bastille, Rita Ora, Kesha, and Fifth Harmony. The DJ sets have also include some of the biggest names in the industry, including Marshmello, The Chainsmokers and Steve Aoki.

As key sponsor of the festival, we’ve been part of its significant success, which has seen generated revenue and visitor numbers increase years after year.

In 2011 we announced our partnership with Transport for London (TFL), which will feature our brand prominently on all 36 passenger gondolas of the Emirates Air Line. The route’s addition to the London Tube map is also the first to feature the sponsoring company’s logo. The cable car will be a conduit for tourists and commuters alike, helping riders discover new areas of London, among them newly regenerated areas such as the rich cultures and vibrant local communities of London's Docklands.