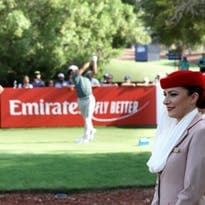 With Germany a key destination in our network, our relationship with the BMW International Open is an important platform for us to engage with golf fans in the country.

Now widely regarded as one of the premier events on golf’s European Tour, the Dubai Duty Free Irish Open is a Rolex Series event with a USD 7 million prize purse held in May at some of the best golf courses in Ireland. Recent winners include Jon Rahm and Rory McIlroy. In 2012, we became the Official Airline of the Irish Open, one of the European Tour’s premier events. This coincided with the launch of our daily service between Dublin and Dubai, and marks our first sponsorship deal in Ireland.