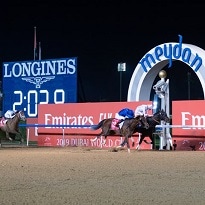 As title sponsor, we’ve helped the Dubai World Cup evolve into one of the world’s top racing challenges that draw the attention of millions of enthusiasts around the globe. The meeting traditionally takes place on the last Saturday of March and is one of the top 5 horse races in the world. It is not just about the world’s richest race as the entire nine-race programme features the greatest names in racing and the sport’s brightest stars. Welcoming over 80,000 race-goers to the event, the Dubai World Cup sponsored by Emirates captivates a global audience and is one of the region’s leading sporting and social events.

Godolphin is the global horseracing entity owned by the Maktoum family, named in honour of the Godolphin Arabian, one of the three founding stallions of the modern thoroughbred. Established in 1992, the stable has a reputation of excellence and has become the world’s foremost international racing organisation, winning over 250 Group One races in 12 different countries.