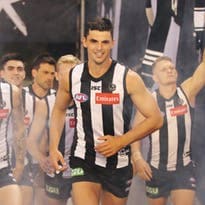 Based in Melbourne, Collingwood Football Club is one of the most famous and widely supported sporting clubs in the Australian Football League (AFL) and across all sports in Australia. This popularity was enough to convince Emirates to become a Premier Partner of the club in 1999.

In 2000, Collingwood - nicknamed the Magpies - moved its home ground from the traditional suburban location of Victoria Park, to the much larger venue of the Melbourne Cricket Ground, where the first team regularly draw crowds of over 70,000. Collingwood’s fierce rivalry with other Melbourne-based teams; Essendon, Richmond and Carlton, often see up to 100,000 fans filling the impressive stadium.

The AFL season runs from March to September each year, with the Emirates logo proudly displayed on the front of Collingwood’s guernseys and shorts. In addition to this, Emirates branding is visible on Collingwood’s training apparel and around the Melbourne Cricket Ground.

Collingwood has won 15 VFL/AFL premierships and has contested more Grand Finals than any other club in the history of the sport.