The Emirates ICC Men’s T20 World Cup A380 livery makes its debut, capturing the energy and spirit of the long-awaited tournament 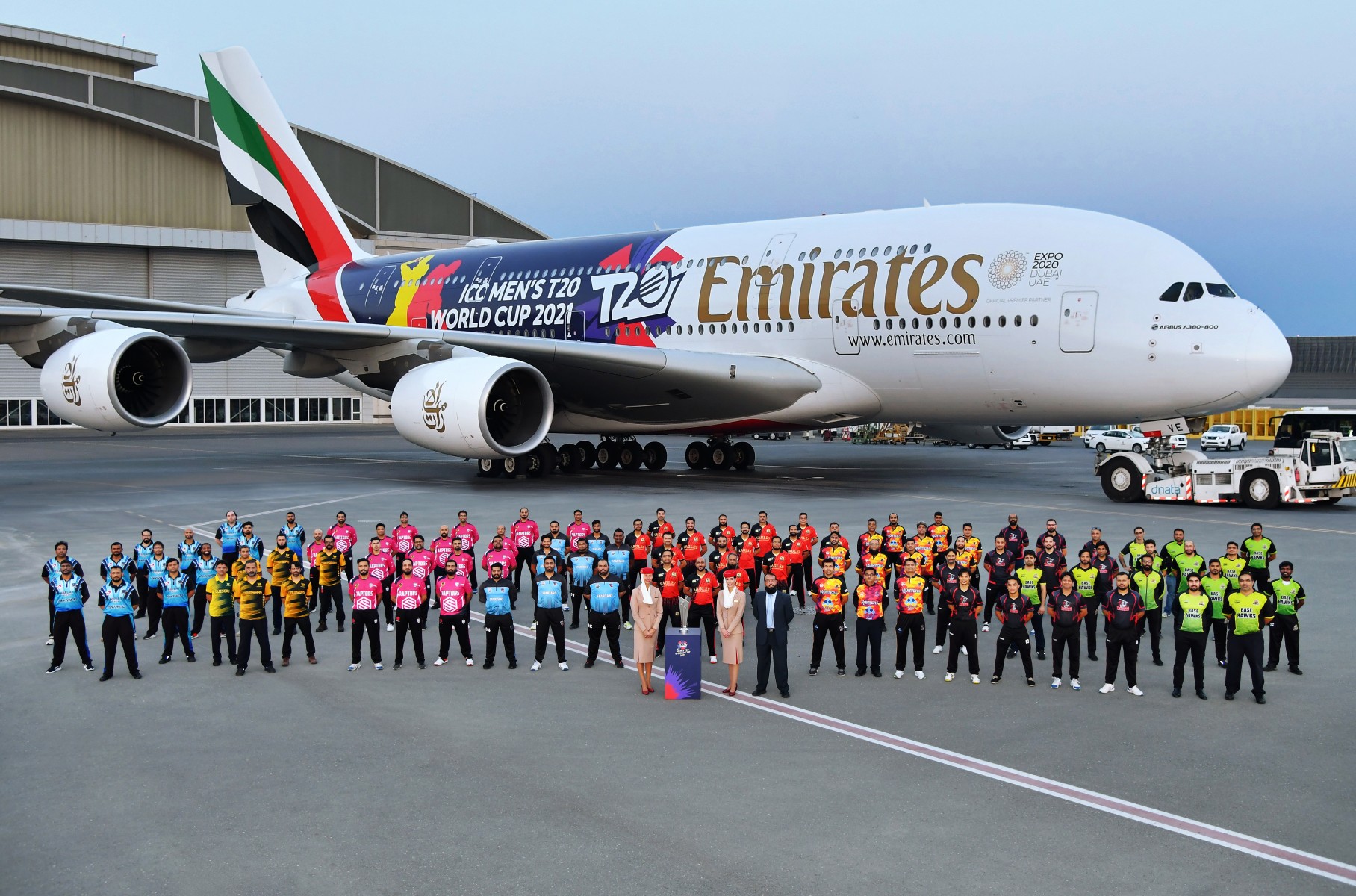 Dubai, UAE, 17 October 2021: Building on the excitement and fervour for the return of the ICC Men’s T20 World Cup, Emirates has revealed its own themed A380 livery, just in time for today’s kick off of one of the most hotly anticipated events in the world of sport, taking place for the first time in the UAE and Oman.

After a game of mini-cricket umpired by Indian international cricketer Shikhar Dhawan, the newly emblazoned aircraft was beckoned out as the ‘newest player’ by him and over 100 Emirates Engineering employees, many of whom were involved in the installation of the special decal and form part of the nine cricket teams at the airline’s engineering centre. The ICC Men’s T20 Cricket World Cup trophy also made a surprise debut once the aircraft was unveiled, and enthusiastic employees got the chance to pose with the iconic trophy.

Boutros Boutros, Divisional Senior Vice President, Corporate Communications, Marketing & Brand for Emirates Airline said: “We are excited that the iconic ICC Men’s T20 Cricket World Cup is taking place here in our home, the UAE, and we’re proud as the official airline and partner to bring in teams from all over the world to compete in what is going to be a truly memorable event fuelled by the passion of fans. Today’s livery unveiling is just one way we are bringing the flavour of the sport to fans around the world who are feverishly looking forward to thrilling cricket action after a long hiatus, and we hope to fly this aircraft to as many cricket loving nations as possible.”

Anurag Dahiya, Chief Commercial Officer of International Cricket Council (ICC) said: “It is fantastic to see the ICC Men’s T20 World come to life with this themed A380 livery, what better way to spread the appeal of the event than to transport it around the world with our long-standing partner Emirates. It has been more than five years since the last Men’s T20 and the sense of excitement and anticipation is building with fans as the world’s best players descend on Oman and the UAE to compete for the ultimate prize in the shortest format of the game.”

Emirates directly serves 12 nations participating in the seventh edition of the ICC T20 Men’s Cricket World Cup, which is the largest cricket event to be held since the onset of the pandemic. This is also the first time a cricket event of this magnitude takes place in the region, and matches will be played over the next month across the UAE and Oman.

The vibrant decal covering the Emirates A380 fuselage includes pink and yellow figures batting and bowling against a purple backdrop. The decal was installed on A6-EVE, and the emblazoned aircraft made its first trip to Mauritius yesterday. Over the next few months, the aircraft is expected to fly across the Emirates’ growing A380 network, and will make visits to the UK, South Africa, The Netherlands, and other cricketing nations.

Emirates has been supporting the game of cricket for almost 20 years, and is the Official Airline and Global Partner of the International Cricket Council (ICC). The airline will also sponsor the ICC Cricket World Cup 2023 which will be held in India, as well as the event’s match officials selected from the Emirates ICC Elite Panel of ICC Umpires, the Emirates ICC International Panel of Umpires and the Emirates ICC Elite Panel of Match Referees, which also sees Emirates featured on their official kit. Along with the ICC Men’s T20 World Cup, Emirates also supports the Women’s T20 World Cups and the ICC Women’s Cricket World Cup.

Emirates also supports a number of cricket clubs, and is the official sponsor of Durham County Cricket Club and Lancashire County Cricket Club, with naming rights to both clubs’ playing grounds, Emirates Riverside and Emirates Old Trafford, and their respective T20 representative teams.

The Emirates ICC Men’s T20 World Cup A380 livery makes its debut, capturing the energy and spirit of the long-awaited tournament