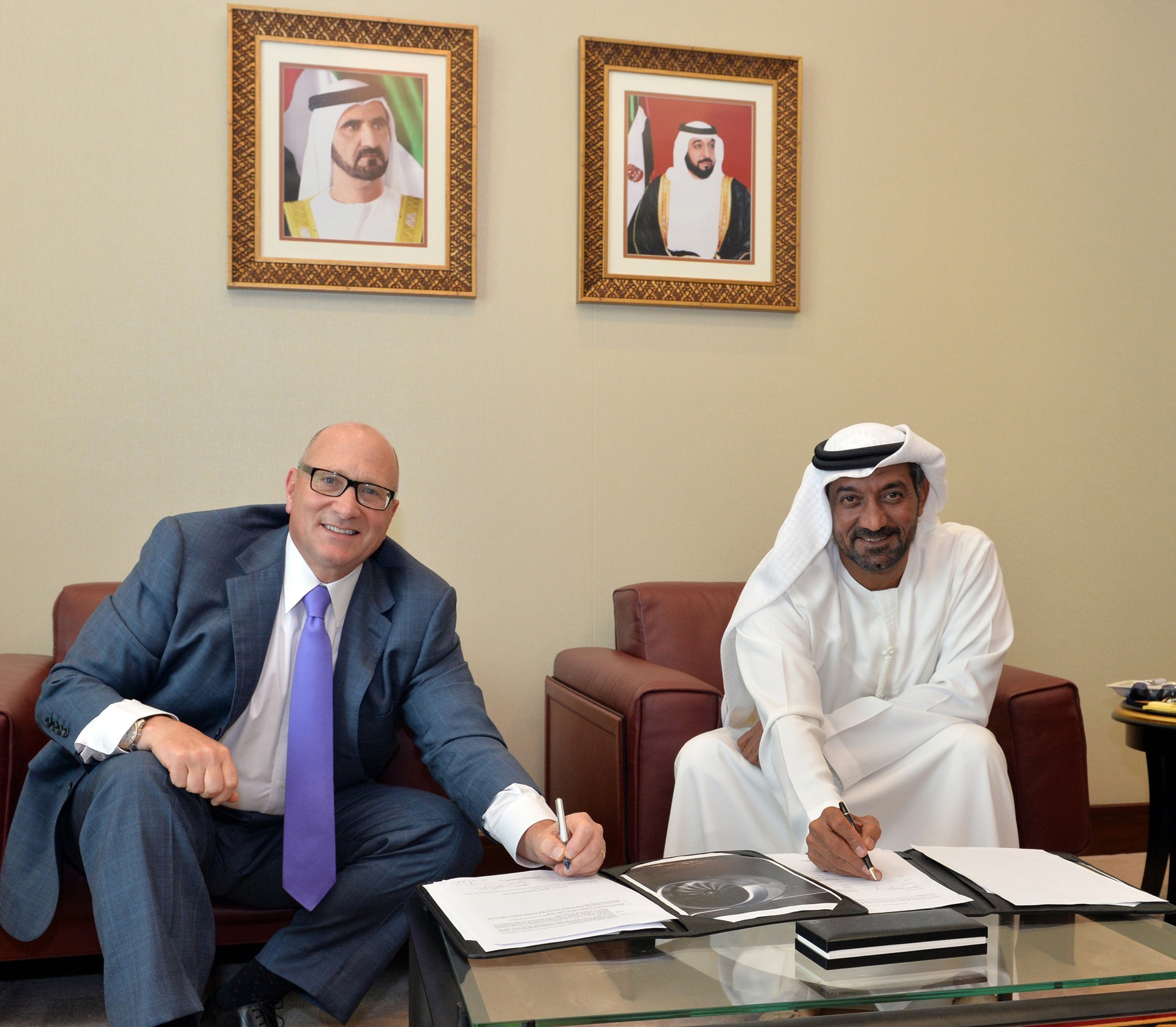 At the Dubai Air Show today, HH Sheikh Ahmed bin Saeed Al Maktoum, Chairman and Chief Executive, Emirates airline and Group (right), and David Joyce, President and Chief Executive Office for GE Aviation signed a US$16 billion agreement OnPoint solution agreement for the maintenance, repair and overhaul (MRO) of the GE9X engines that will power Emirates’ fleet of 150 Boeing 777X aircraft over a period of 12 years. This is Emirates’ largest engine MRO contract to date.

DUBAI, U.A.E., 9 November 2015 - Emirates has signed a US$16 billion OnPoint solution agreement with GE Aviation for the maintenance, repair and overhaul (MRO) of the GE9X engines that will power the airline’s fleet of 150 Boeing 777X aircraft over a period of 12 years. This is Emirates’ largest engine MRO contract to date.

At the 2013 Dubai Air Show, Emirates placed a record US$ 76 billion order for 150 Boeing 777X twin-engine aircraft, powered by GE's new GE9X engine. The single largest order by value in the history of US commercial aviation, it included 300 units of GE9X engines, alone worth US$16 billion at list price. It was also GE Aviation’s largest ever commercial jet engine award from an airline.

Emirates also signed a 12-year OnPoint solution contract with GE Aviation worth US$36 million, covering the maintenance and inventory support for various avionics, electrical power and mechanical systems on all Emirates Boeing 777 aircraft in currently service and the 44 more 777-300ERs on order. Under this programme, GE will provide the maintenance  and support services for Emirates’ Boeing 777 fleet with a strengthened local programme management and stock support in Dubai, supported by GE’s global  repair, overhaul and logistics facilities in the UK, the US, and Asia.

HH Sheikh Ahmed bin Saeed Al Maktoum, Chairman and Chief Executive, Emirates airline and Group said: “Operating a modern and efficient fleet is at the foundation of Emirates’ success. Aircraft and engine purchases are long-term investments. It is also a commitment that involves many other related services over the life-span of the aircraft, generating and sustaining jobs throughout the aviation supply chain.

“Emirates currently operates GE engines on over 100 Boeing 777 in our fleet. Over the years, we have built a successful relationship with the GE team, and we cooperate in many areas including technology and innovation sharing, and also at our state of the art engine maintenance centre in Dubai. We look forward to extending this partnership to our GE9X-powered Boeing 777X fleet.”

David Joyce, President and CEO of GE Aviation, said: "The relationship between GE and Emirates remains strong, and the finalization of the GE9X OnPoint agreement further extends our partnership well into the future. The OnPoint solution agreement will allow us to provide comprehensive MRO support along with OEM parts and work scopes to ensure the engines remain in peak operating condition."

OnPoint solutions are customized service agreements tailored to the operational and financial needs of each airline customer. These agreements are designed to help lower the customers' cost of ownership and maximize the use of their assets. Backed by GE's global support network, OnPoint services may include overhaul, on wing support, new and used serviceable parts, component repair, technology upgrades, engine leasing, integrated systems support and diagnostics and integrated systems.

Emirates is the world's largest operator of the GE90-powered Boeing 777-300ERs, with more than 100 aircraft in fleet and over 40 units more pending delivery. Emirates also operates the largest fleet of A380s powered by the GP7200 engine produced by the Engine Alliance, a joint company of GE Aviation and Pratt & Whitney.

The relationship between GE Aviation and Emirates has extended beyond the delivery and support of jet engines, with GE playing an integral role in the construction of Emirates' expanding engine overhaul capability at its new and advanced engine maintenance centre in Dubai.

With a fleet of 242 aircraft, Emirates currently flies to more than 140 destinations in 80 countries around the world.  More than 1,500 Emirates flights depart Dubai each week on their way to destinations on six continents.

GE Aviation, an operating unit of GE (NYSE: GE), is a world-leading provider of jet and turboprop engines, components and integrated systems for commercial, military, business and general aviation aircraft. GE Aviation has a global service network to support these offerings. For more information, visit: www.ge.com/aviation.