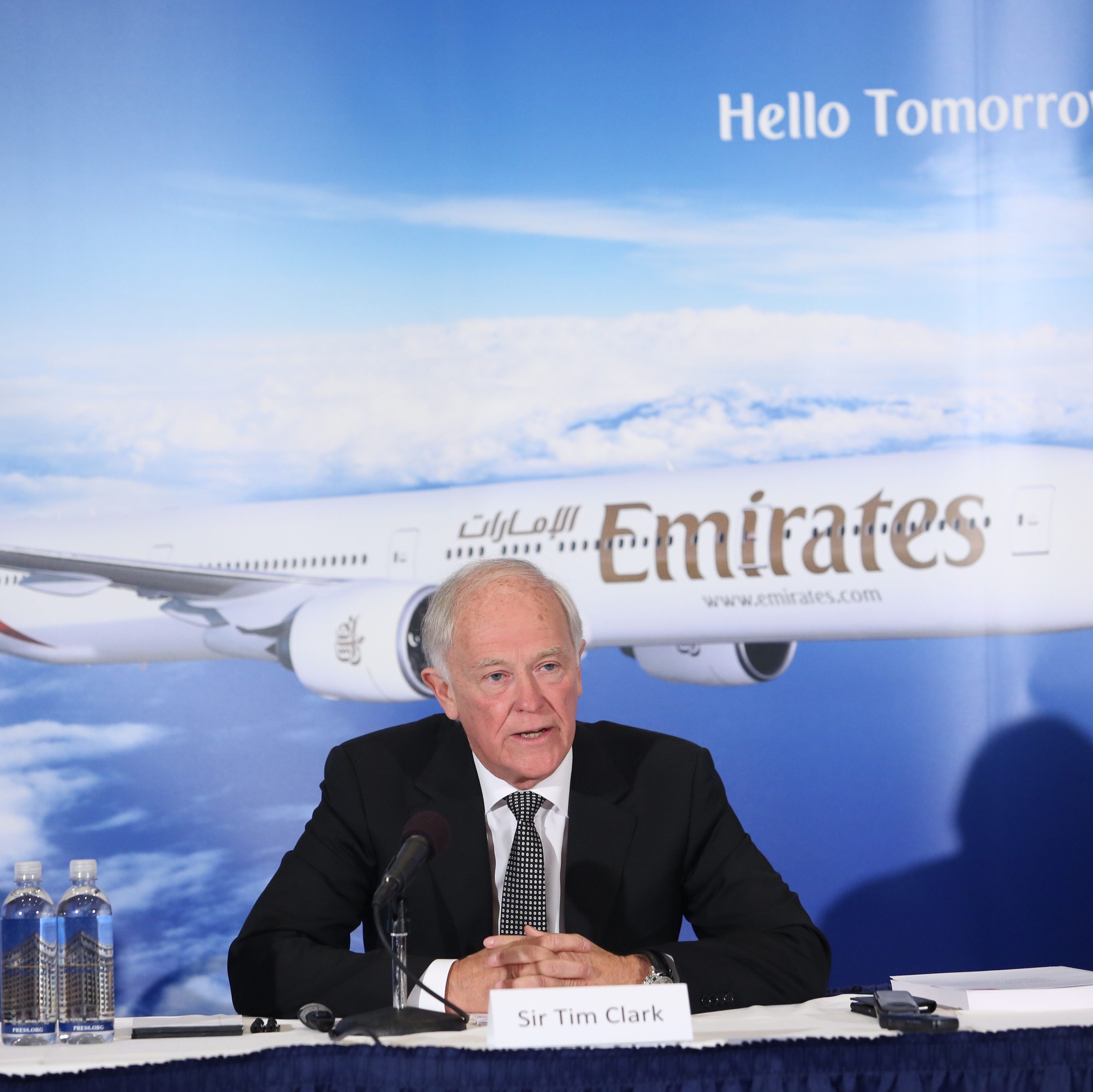 Sir Tim Clark, President of Emirates Airline, Addresses Audience at a Press Conference on June 30, 2015 at the National Press Club in Washington D.C.

The full document was released to the media and public, following meetings yesterday where an Emirates delegation briefed officials from the US Departments of State, Transportation, and Commerce on the airline’s response.

The US legacy carriers launched an aggressive lobbying campaign in January, in a protectionist bid to restrict consumer choice, and restrict the growth of international flights to the USA operated by Emirates and other Gulf airlines. Only on 5 March did the US legacy carriers publicly release their 55-page white paper which presented so-called “evidence” of Emirates receiving subsidy and competing unfairly. Full appendices to the 55-pager were not made public until 21 April.

Sir Tim Clark, President Emirates Airline said: “The methods employed by the US legacy carriers to discredit Emirates have been surprising and frankly, repugnant. We do not underestimate their lobbying prowess, but facts are facts. Unlike the Big 3’s white paper, which is riddled with inaccuracies, conjecture, and legal misinterpretations, Emirates’ response is comprehensive and based on hard facts. We clearly show why the Big 3 have no grounds to ask the US government to unilaterally freeze Emirates’ operations to the USA or pursue other action under the Open Skies agreement. It is because we are absolutely not subsidized, and our operations do not harm these legacy carriers, but instead benefit consumers, communities and America’s national economy.”

US legacy carriers are wrong on facts: Emirates is not subsidized

Emirates’ response systematically disproves each of the Big 3’s allegations that it has received over $6 billion in subsidies, including fuel hedging subsidies; purchasing goods and services from related third parties at below-market terms; disproportionately benefiting from airport infrastructure and user fee at Dubai International airport; and having an artificial cost advantage through the structure of the UAE’s labor law.[i]

Sir Tim said: “The subsidy allegations put forward by the Big 3 are patently false. We have been profitable for 27 years straight, and unlike our accusers, we have never depended on government bail-outs or protection from competition. In fact, we were told right from the start by the government of Dubai that Emirates has to deliver profits and stand on its own feet. We had to then, and we still have to now. Dubai has no oil reserves to speak of, and therefore it embarked on a well-documented strategy to diversify its economy with air transport as a key enabler. That directive is what led us to pioneer a successful business model as an efficient long-haul connector that offers customers a best-in-class experience.

“Our global expansion is funded from our own cash flow, and debt raised in the open market through banks and financial institutions. Our success is due to superior commercial performance. To date we have paid our shareholder, the Dubai government, more than $3 billion in dividends. All of this is laid out in our financials, audited by Pricewaterhouse Coopers. We are financially transparent, and have published fully audited accounts for over 20 years.”

US legacy carriers built their case on wrong legal standards, ask the US government to act against the law by imposing a unilateral freeze

Much of the Big 3’s case rests on the legal premise that the WTO’s anti-subsidy rules apply to international aviation or is implicitly incorporated in the US Open Skies Agreements. This is fundamentally wrong. The WTO Agreement on Subsidies and Countervailing Measures (SCM agreement) does not apply to services, which are covered by a separate WTO Agreement, the General Agreement on Trade in Services (GATS). GATS explicitly excludes air transport services, and does not include rules on unfair subsidies.

Sir Tim said: “It is ironic that the Big 3 are trying to argue their case based on WTO rules, when the USA, at the behest of these same legacy carriers, has always opposed efforts to bring air transport into GATS.  Part of that reason would be because the US carriers themselves would be a prime target for restrictions, and would for the first time have to compete with foreign carriers in their protected US domestic market. Even if WTO rules applied – which they don’t - the legacy carriers would have to show that Emirates was subsidized and that competitive injury resulted, and they have failed to do this.”

The Big 3 also build their case for a unilateral freeze on Article 11 of the Open Skies Agreement, but this is the wrong article. Article 11 (“fair and equal opportunity”) deals with access. Subsidies are addressed in Article 12 which sets out specific procedures for dealing with artificially low prices “due to direct or indirect governmental subsidy or support”. In addition, both Articles 11 and 12 prohibit unilateral actions with very limited exceptions that do not include subsidies.

Sir Tim added: “By asking the US government to take unilateral action, the Big 3 are asking the US to breach its own negotiated international obligations. This would put in jeopardy America’s Open Skies relationships with 113 other countries, and all the significant public and competition benefits that the Open Skies program has generated.”

Wrong for the United States: restricting competition would hurt US consumers, communities and the national economy

The US legacy carriers have framed their complaint in terms of their own narrow interests. They assert fealty to the “foundational principles” of Open Skies but the reality is they favor Open Skies agreements only when such work to their financial advantage, and they seek to lock out airlines that offer consumers a competitive choice.

Emirates proudly contributes to the goals of Open Skies which are: greater competition, increased flight frequency, consumer choice, promotion of business travel and tourism, improved service, and customer-centric innovation. We do that by offering US consumers, communities and exporting companies direct flights to more than 50 cities not directly served by any American carrier. We transport tourists, business travelers and goods, connecting America to some of the fastest growing economies in the world, in Africa, Asia and the Middle East.

We operate all our flights on a fully commercial basis, with the high average seat load factors of over 80% on our USA services responding to consumer demand for our high-quality services.

Emirates today flies 84 flights each week from nine USA gateways – Boston, Chicago, Dallas/Fort Worth, Houston, Los Angeles, New York, San Francisco, Seattle, and Washington DC.  The estimated annual economic value of Emirates’ services to these airports and their surrounding regions is $2.9 billion[ii]. In addition, via interline arrangements, Emirates has provided over 775,000 feed passengers to US legacy carriers, producing $133 million in financial benefits to them over the past five years.[iii]

The Big 3 are earning record profits, while seemingly content to remain on the lower ranks of global customer satisfaction surveys. They claim to have lost traffic to competition but in fact on every route that Emirates has established to the US, overall traffic has grown significantly after Emirates' entry.[iv]

The Big 3 assert, in their PR campaign, that if a daily wide-body flight by a legacy carrier is lost to a foreign carrier, then 800 US jobs will be lost. The Big 3 relied on two studies of job creation in the German and Austrian markets to make their analysis, and on closer examination, these studies actually contradict their arguments and find that Emirates supported 2,400 jobs in Germany and 3,300 jobs in Austria per round trip. More specific to US jobs, aviation experts Campbell-Hill Aviation Group has analyzed the US jobs effect of Emirates’ flights to the USA, and found that Emirates supports nearly 4,000 US jobs per daily round trip service. [v]

Groundswell of support from broad spectrum of US stakeholders

As submissions to the US Government illustrate, there is a tremendous groundswell of support from across the spectrum of US stakeholders who believe the US national interest is best served by maintaining Open Skies policy and not selectively unraveling it.

These stakeholders, representing low cost carriers, non-legacy carrier hub cities and airports, air cargo carriers, leading hospitality and tourism businesses amongst others, are a far better barometer than the self-interested legacy carriers. These stakeholders believe the national interest should be the Obama Administration’s North Star in this matter, and not the parochial interest of Delta, United and American in constraining competition for their benefit alone.

Sir Tim said: “The Big 3’s white paper is littered with self-serving rhetoric about ‘fair trade’, ‘level playing field’, and ‘saving jobs’, but their mess of legal distortions and factual errors falls apart at the slightest scrutiny. The allegations about Emirates receiving subsidies or competing unfairly are false. The Big 3 are far from being ‘harmed’ financially by Emirates’ operations, and they are not even operating in the same markets that we are.

“What’s happening is that the legacy carriers, not satisfied with their protected domestic market, plus their anti-trust immunized global alliances which let them collude on capacity and price with joint venture partners, are now flexing their lobbying muscle to further restrict valuable international air transport links for American consumers, communities and companies. The case put forward by Delta, United and American Airlines against Emirates is full of holes, and if their protectionist campaign were to be successful, it will not end with just the Gulf airlines.”

Emirates’ full response submitted to the US Departments of State, Transportation, and Commerce, can be viewed here: www.emirates.com/USsubsidyRebuttal

[i] See section I of Emirates’ full response document. Pages 1 - 65

[ii] According to economic impact studies from respective airports or regions