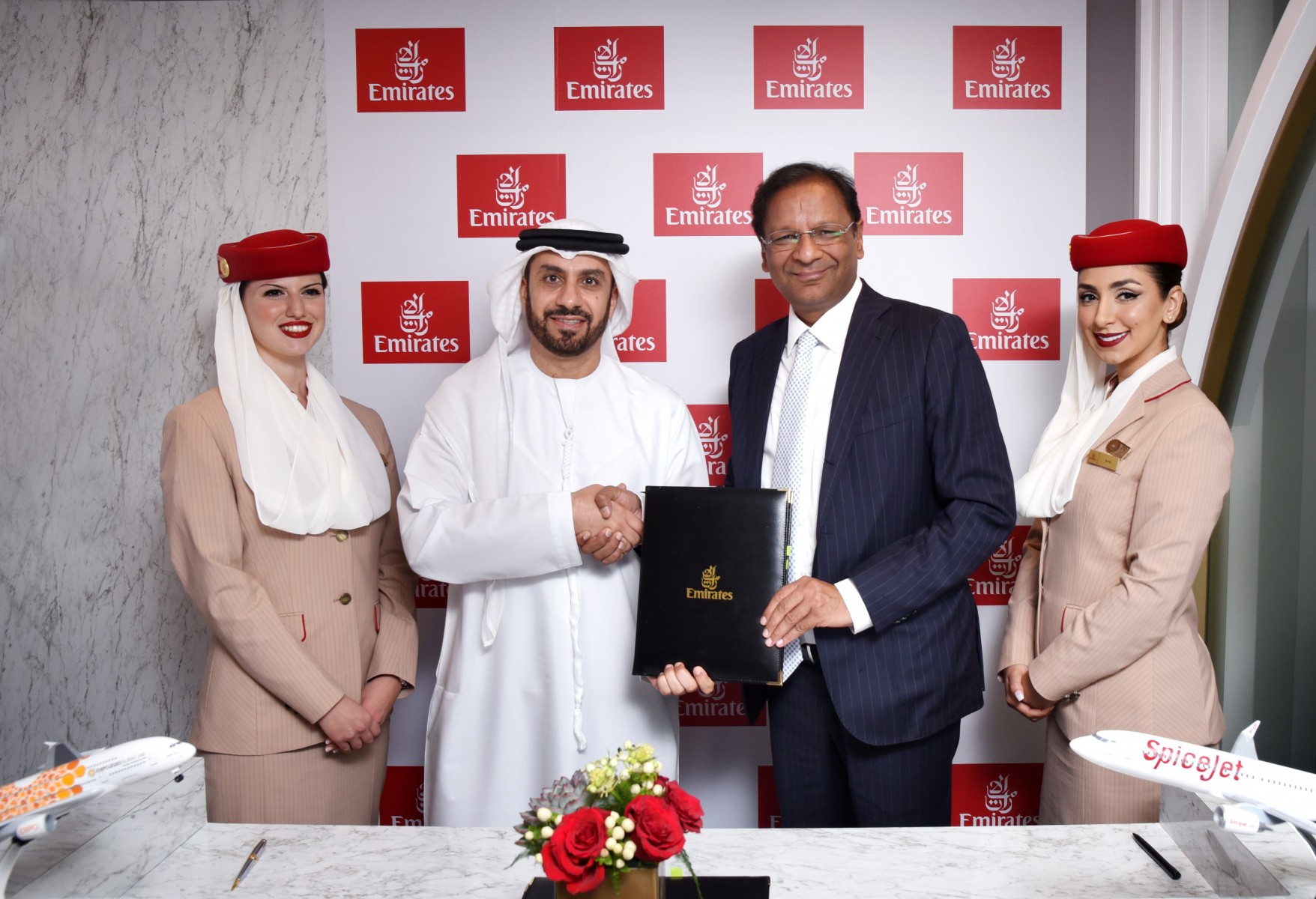 Dubai, UAE, 25 November 2019 – Emirates has signed a codeshare and interline agreement* with SpiceJet to give travellers to and from India seamless access to a wider and a stronger route network. This is the first-ever codeshare agreement signed by SpiceJet.

From early 2020, customers travelling to India can take advantage of many more flight options on routes common to both airlines – Ahmedabad, Mumbai, Cochin and Delhi. Emirates’ customers can conveniently book and connect seamlessly in Dubai on direct services to Amritsar, Calicut, Mangalore, Madurai, Jaipur and Pune – routes served by SpiceJet.

The codeshare agreement means travellers from across the globe can book a single ticket with attractive fares to any of Emirates’ nine points across India and connect onwards to 172 domestic routes that are part of SpiceJet’s network. SpiceJet’s domestic network includes popular destinations like Goa, Dehradun, Dharamshala, Jaisalmer, Jammu, Srinagar, Leh, Guwahati, Pondicherry, Port Blair, Shirdi, Tirupati, Udaipur and Varanasi.

In this first phase of the interline agreement, customers can start booking flights from 25 November, for travel starting 15 December 2019.

Adnan Kazim, Emirates’ Chief Commercial Officer said: “Emirates has historically shared a close and collaborative bond with India. In the last decade, we have flown more than 50 million customers on our Indian routes, which we now serve with 170 weekly services from Dubai. Our partnership will help us leverage SpiceJet’s extensive route network, so that our customers who are visiting friends and family can fly closer to their hometowns, while tourists can more easily access many of the incredible sights and sounds India has to offer. This will also have a significant and positive impact on businesses in both countries and globally. We look to strengthening our partnership with SpiceJet even more in the coming months.”

Ajay Singh, Chairman and Managing Director, SpiceJet said: “We are very pleased to partner with Emirates for this new codeshare agreement which will offer a seamless travel experience and the widest possible travel options to our passengers travelling to and from Europe, America, Africa and the Middle East. This codeshare will further strengthen our position in the region and complement our international expansion strategy.”

The codeshare agreement follows the signing of a Memorandum of Understanding (MoU) by both airlines in April 2019.

*The codeshare agreement is subject to government approvals.

Emirates is the world’s largest international airline with a global network of 159 destinations in 85 countries and territories across six continents. Emirates operates 269 modern aircraft and is the world’s largest operator of the Airbus A380s and Boeing 777s. Luxurious amenities, regionally inspired gourmet cuisine, an award-winning inflight entertainment system – ice – and unmatched hospitality provided by its iconic multilingual cabin crew from over 135 nationalities have made Emirates one of the world’s most recognised airline brands.

In October 1985, Emirates launched flights from its Dubai hub to Delhi and Mumbai which formed the base of its initial route network. Since then, Emirates has grown its India operations to serve a total of nine destinations across India - Ahmedabad, Bengaluru, Chennai, Delhi, Hyderabad, Kochi, Kolkata, Mumbai and Thiruvananthapuram – with 170 weekly flights. The Emirates Group currently employs more than 13,700 Indian nationals globally – constituting 21% of its workforce, most of them in high-skilled employment.

SpiceJet is India’s favourite airline that has made flying affordable for more Indians than ever before. SpiceJet operates 630 average daily flights to 64 destinations, including 54 domestic and 10 international ones. The airline has a fleet of 82 Boeing 737, 32 Bombardier Q-400s and four B737 freighters. SpiceJet offers business class seating - SpiceBiz – on key domestic routes. The majority of the airline’s fleet offers SpiceMax, the most spacious economy class seating in India.