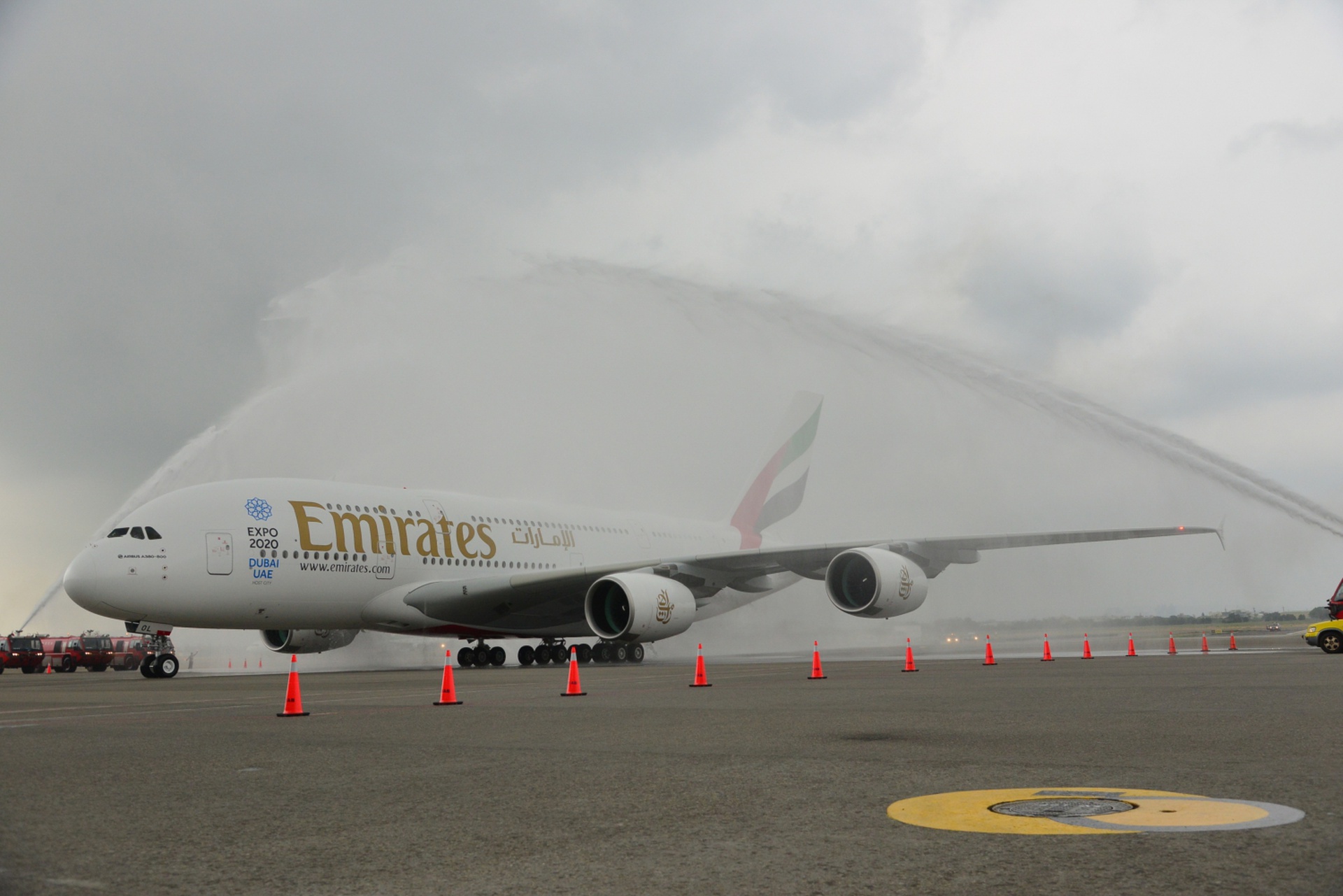 DUBAI, UAE, 19th July, 2015: Emirates, a global connector of people and places, today operated a one-off service of its flagship Airbus A380 aircraft to Taiwan Taoyuan International Airport. The arrival of the A380 follows the recent completion of enhancements at the airport to make it compatible with the double-decker aircraft.

“Emirates is honoured to be the first airline to land the A380 at Taiwan Taoyuan International Airport. Taiwan is an important market for Emirates, and we’ve witnessed increased demand from passengers since we began daily flights between Dubai and Taipei in February 2014. We’re pleased to have the opportunity to showcase our state-of-the-art on-board products and services to passengers in Taiwan,” said Edwin Lau, Emirates’ Vice President, Hong Kong, Taiwan and Guangzhou.

“I am honoured to welcome the arrival of the Emirates A380 aircraft. Taoyuan Airport Corporation and all my colleagues share in the glory of today’s event,” said David Fei, President and CEO of Taoyuan International Airport Corporation.

“This event is the result of a year of preparations and we are proud to welcome the A380, which demonstrates Taoyuan Airport’s high quality facilities, equipment, and operational readiness,” Mr. Fei concluded.

“Thanks to the growing number of international passengers, major airlines such as Emirates come in succession to operate in Taiwan. This growth is testament to the ever-increasing standard of service at Taoyuan Airport, which is in line with some of the leading airports in the world,” said Administrative Deputy Minister Fan Chih-Ku of MOTC.

After the welcoming ceremony, an onboard guided tour of the A380 took place for all attendees, which included Taiwan government authorities, media, and honourable guests of the travel industry.

On the Emirates A380, First Class passengers can relax in one of 14 flat-bed, massage-equipped Private Suites; the cabin also has two exquisitely designed onboard Shower Spas, ensuring a revitalised and refreshed arrival.

Passengers in all classes can use the on-board Wi-Fi and enjoy Emirates’ award-winning ice (information, communication, entertainment) Digital Widescreen inflight entertainment system, which features over 2,000 channels.

Emirates network includes 146 destinations from over 80 countries across six continents. Via one stop in Dubai, passengers who travel from Taipei can connect to other Emirates destinations in the Middle East, Africa, Europe and the Americas.

As the world’s largest operator of the double-decker aircraft, Emirates fleet of 64 A380s serves 34 global destinations and 11 in the Far East, which include Auckland, Bangkok, Beijing, Brisbane, Hong Kong, Melbourne, Perth, Seoul, Singapore, Shanghai and Sydney.