On Friday 18 September, Emirates operated a one-off service of its flagship Airbus A380 aircraft to Brussels Airport, to celebrate the first anniversary of Emirates’ operations in Belgium.

To mark the arrival of the aircraft, a first for the airline in Belgium, an event was hosted by Mr. Jean-Pierre Martin, Emirates’ Manager in Belux and Mr. Arnaud Feist, CEO of the Brussels Airport Company. In attendance were guests from the media, industry colleagues and His Excellency, Sulaiman Hamid Almazroui, Ambassador for the United Arab Emirates to the Kingdom of Belgium and the Grand-Duchy of Luxembourg as well as Head of Mission to the European Union and Mr Pieter de Crem, Secretary of State for Foreign Trade and Mr Eric Soeur, Advisor to the Federal Minister of Mobility. 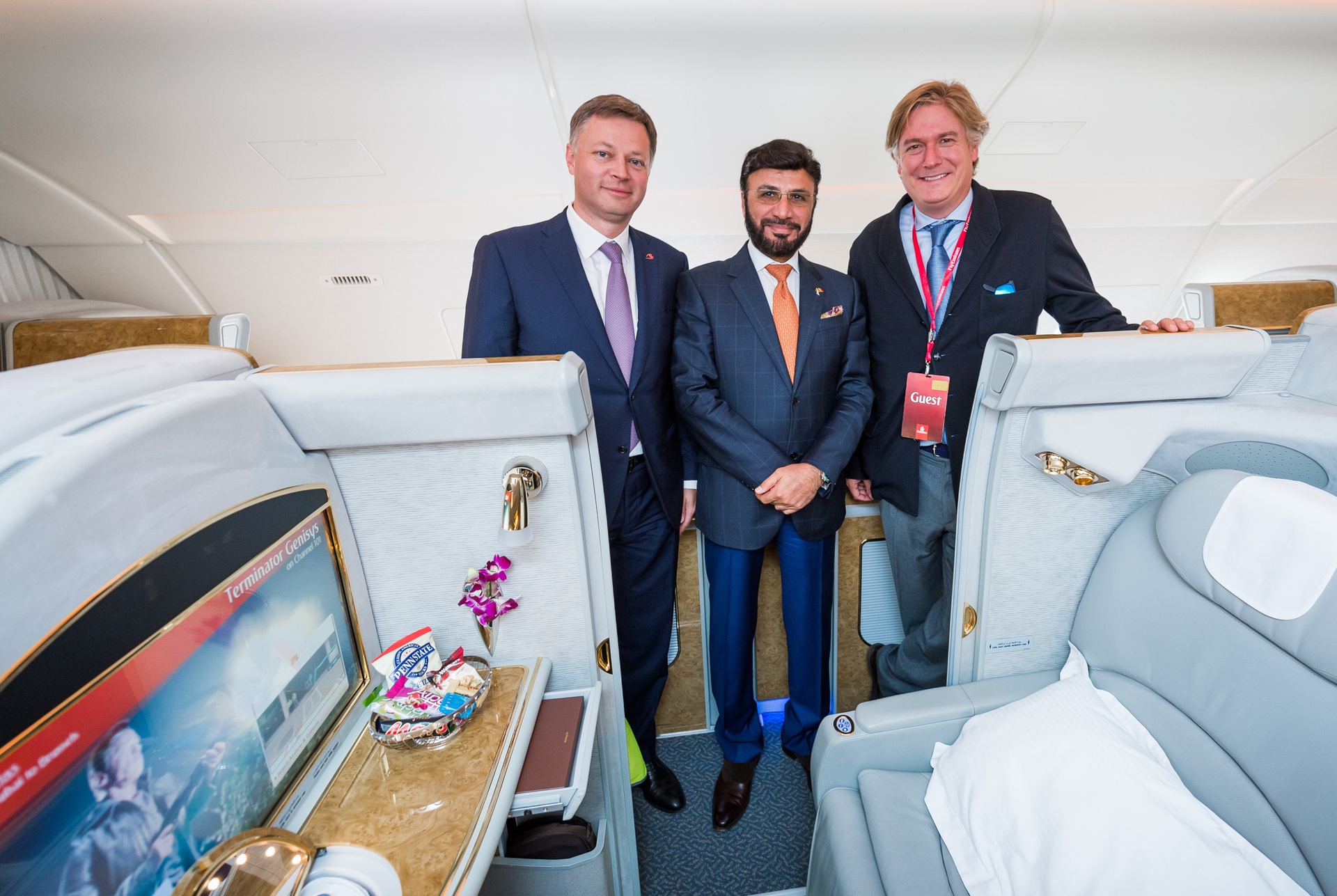 “After a very successful year of operation, we are very pleased to be able to bring our flagship, double-decker Airbus A380 aircraft here to Brussels, if only just for a day,” said Jean-Pierre Martin, Emirates’ Country Manager, Belgium and Luxembourg.

He continued: “We usually operate the route with our equally impressive Boeing 777-300ER product, which over 230,000 passengers travelling to and from Dubai have enjoyed since our launch of services to Brussels in September 2014. As the only airline to offer a First Class product to the Middle East, we pride ourselves on offering our business and leisure passengers in Belgium a high quality onboard and on ground experience. We look forward to welcoming more Belgian passengers on our flights to Dubai in the future.”

Upon landing, Emirates’ flagship A380 aircraft was greeted with an honorary water cannon salute as it taxied to the gate. Dignitaries, media and industry guests were then invited on hosted tours of the Emirates A380 to see the product offering. They were shown the First Class area where passengers can relax in one of 14 flat-bed Private Suites or refresh before landing in one of the two exquisitely designed Shower Spas. They also had the opportunity to visit the signature Emirates A380 onboard lounge, an area designed for Business and First Class passengers to socialise at 40,000ft, and the well-appointed Economy Class cabin where all passengers can enjoy over 2,000 channels of on-demand entertainment on generous 12.1 inch personal screens.

Arnaud Feist, CEO of Brussels Airport Company said this of the landing; “We are pleased to have been able to welcome the Emirates A380 to Brussels Airport for the first time. It was a great opportunity to be able to showcase our ability to facilitate the arrival of such a large, spectacular aircraft. It has been a pleasure to work with Emirates on this event and throughout the past year and we look forward to a fruitful relationship in the future.”

Europe continues to be an important area of focus for Emirates. So far in 2015, the airline has increased capacity to seven of its 37 European destinations, with four additional increases in Zurich, St Petersburg and Copenhagen scheduled before the end of the year.

Globally, four new non-stop routes from Dubai have been launched so far in 2015 - Bali, Indonesia; Multan, Pakistan; Mashad, Iran and Orlando, USA, with Bologna in Italy scheduled to launch in November 2015. On 1st February 2016, Emirates will start services to Panama City, marking the longest non-stop flight in the world (17 hours 35 minutes in the Westbound direction). It will also be Emirates’ first gateway destination in Central America.

IMAGE 1: Emirates’ flagship A380 receives a water cannon salute welcome as it lands in to Brussels Airport for the first time to mark one year of Emirates operations to Belgium.

IMAGE 2: Emirates welcomes HE Sulaiman Hamid Almazroui, Ambassador for the United Arab Emirates to the Kingdom of Belgium and the Grand-Duchy of Luxembourg onboard its flagship A380 in Brussels during a special landing to mark one year of Emirates operations to Belgium. Pictured (centre) with Mr Arnaud Feist, CEO Brussels Airport Company (left) and a guest.

Emirates restores flights to five African countries
Emirates signs new distribution agreement with Amadeus
Emirates signs MoU to promote tourism to The Bahamas
Emirates cleared to resume all US operations
Emirates sees increase in demand for plant-based meals during Veganuary
Emirates does it again, scaling up and circling around the Burj Khalifa to put Expo 2020 Dubai on top of the world’s travel agenda
Media Centre