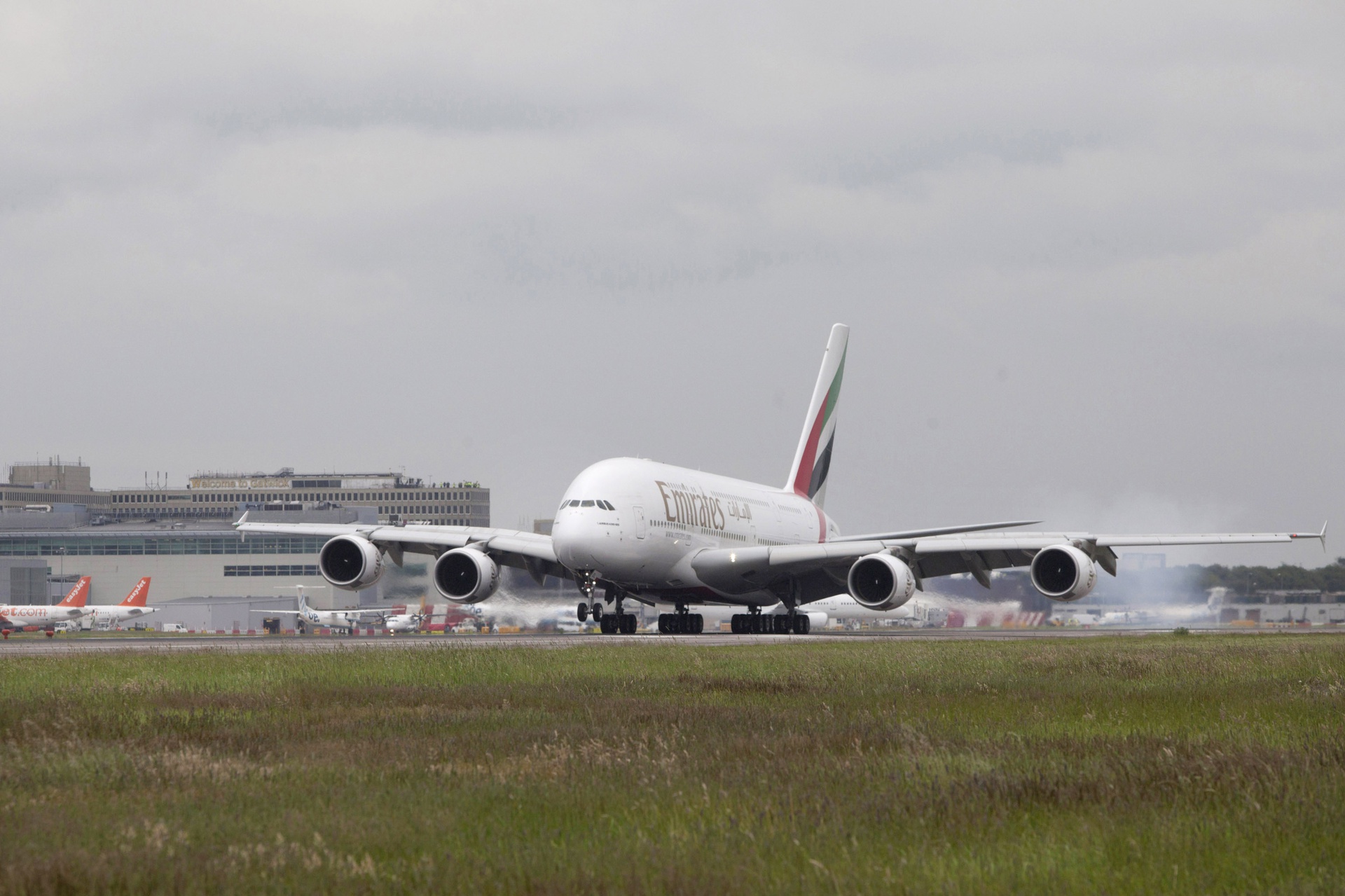 An Emirates A380 lands at London Gatwick Airport

DUBAI, U.A.E., 6th August 2015: Emirates’ eight daily flights to London will all be served by the highly popular A380s from January 1st 2016, cementing the airline’s status as the largest international A380 operator into the British capital.

Combined with the airline’s double daily A380 services to Manchester, Emirates will offer 70 A380 flights per week into the UK, more than any other country on the Emirates network. The third A380 into London Gatwick will replace Emirates flights EK011/EK012 from 1st January 2016, providing customers with a consistent A380 experience no matter what time of day they travel.

“The deployment of a third A380 to London Gatwick now means that travellers to and from London can enjoy our world-class A380 on every flight,” said Hubert Frach, Emirates Divisional Senior Vice President, Commercial Operations West. “In the last five years we have increased capacity into London by over 25 percent. This demonstrates the attractiveness of the A380 with its ability to serve customer demand at slot-constrained points without the need for adding another frequency.”

“The additional A380 service also means that passengers can now experience Emirates’ flagship A380 experience all the way through to London from popular inbound destinations such as Bangkok, Sydney, Melbourne, Brisbane and Shanghai, further strengthening our position as a provider of world class travel.’’

Emirates has steadily grown its London A380 operations since first deploying the aircraft on a scheduled service to Heathrow in December 2008 – the second A380 destination to join the airline’s network.

Emirates’ First Class, Business Class and Skywards Platinum and Gold members will also benefit from access to the largest lounge on the Emirates network located at London Gatwick Airport. Customers travelling in First Class and Business Class can also take advantage of the airline’s dedicated Chauffeur Drive drop off point, located in close proximity to the Emirates check-in desks.

The Emirates A380 offers spacious seating in Economy Class, access to the world’s only onboard Shower Spas for First Class passengers and the Onboard Lounge where First Class and Business Class passengers can socialise at 40,000 feet. Passengers throughout all classes can also enjoy access to over 2,000 channels of films, TV shows, music and games through ice, the airline’s award-winning inflight entertainment system as well as free Wi-Fi connectivity and gourmet cuisine.

As with all Emirates flights, passengers benefit from a generous baggage allowance of 30kg in Economy Class, 40kg in Business Class and 50kg in First Class.

The eighth A380 service into London is another major investment for Emirates in the UK, where it operates 119 weekly flights via six gateways; London Heathrow, London Gatwick, Birmingham, Manchester, Newcastle and Glasgow.

Emirates currently has 35 A380 destinations across its network with Copenhagen joining the airlines A380 network from 1st December.

Emirates airline operates 119 non-stop flights per week from Dubai to the UK– five services a day to Heathrow, three daily to London Gatwick and Manchester, three per day to Birmingham and Glasgow and a daily service to Newcastle. In Dubai, passengers can connect to flights to Emirates’ global network which spans over 145 destinations across six continents in 84 countries.