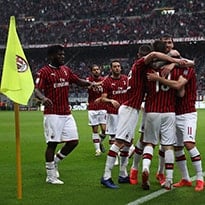 AC Milan is one of the most successful clubs in Europe, with 7 UEFA Champions League titles to their name. From their home grounds in San Siro, officially known as Stadio Guiseppe Meazza, AC Milan has built a formidable reputation in the game. The club has been in the top tier of Italian football, Serie A, since 1929.

AC Milan is an integral part of our sponsorship portfolio, sharing our values such as style, elegance and innovation. We first signed a sponsorship agreement with AC Milan in September 2007 and the following year the relationship was elevated to Top Institutional Sponsor. The prestigious shirt sponsorship deal, spread over five years, first became visible in the 2010/2011 season. In December 2014 we signed a new five-year sponsorship deal with AC Milan, extending the our presence on the club’s shirts until the 2019/2020 season.