Emirates’ Operations in Europe: A €6.8 Billion Impact on GDP 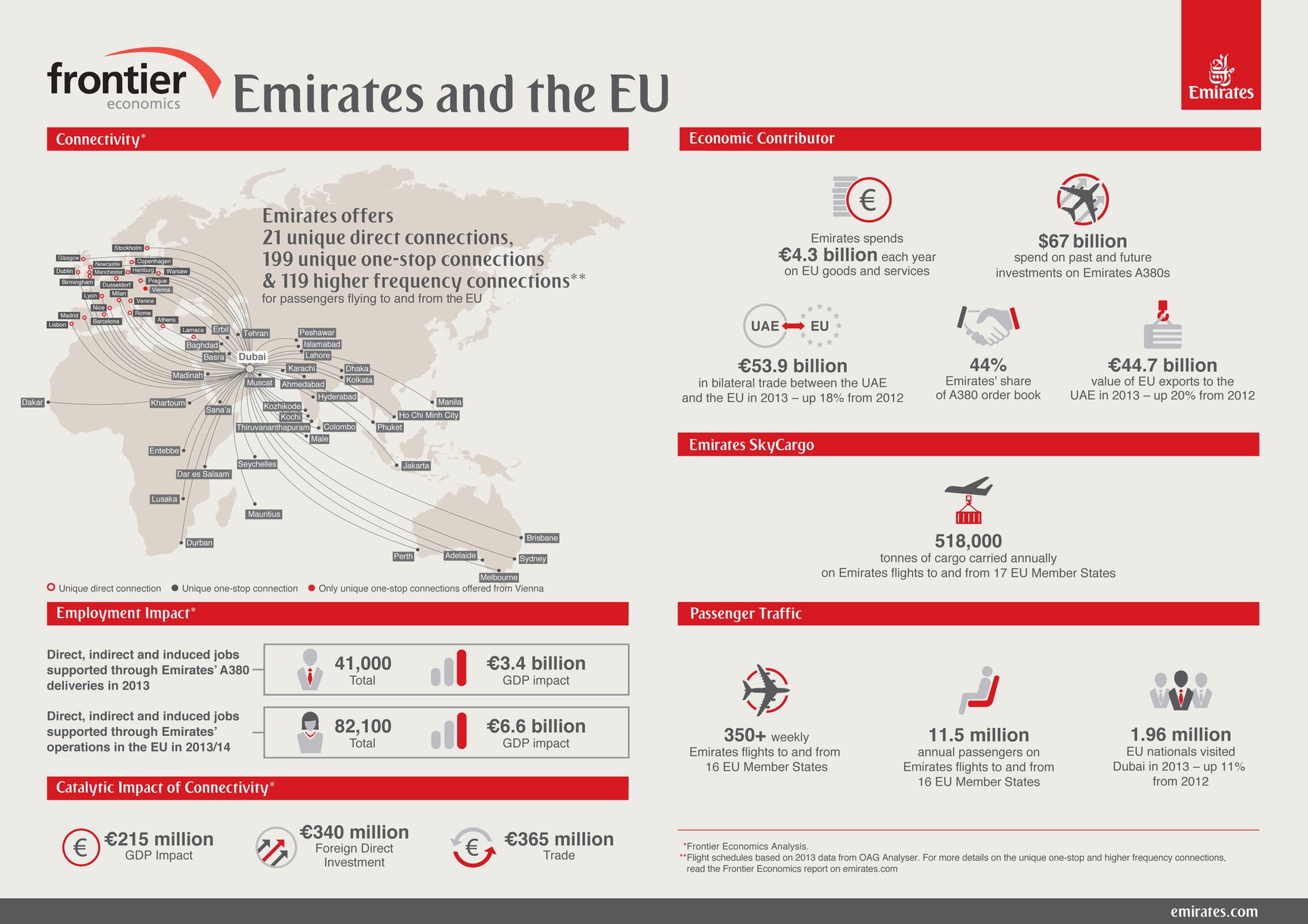 Frontier estimates that Emirates’ operations, including the catalytic impact of the 220 unique connections it offers, supported 85,100 jobs across the EU in 2013/14, equivalent to €6.8 billion of the EU's total GDP. In addition, Emirates’ Airbus A380 deliveries for the same period supported 41,000 jobs, equivalent to €3.4 billion.

"Emirates is fully committed to the European market, the relationship goes back to 1987 when we first started flying from Dubai to London Gatwick. Since then, we have witnessed growth based on demand and now operate over 350 passenger flights a week from Europe, providing global connectivity via our hub in Dubai," commented Sir Tim Clark, President of Emirates. "Emirates’ economic impact is significant; based on Frontier’s report, we supported over one hundred thousand jobs across Europe through our operations and our aircraft purchases from Airbus. By stimulating demand for travel and cargo, especially in markets underserved by other airlines, Emirates contributes to the economies of the communities we serve."

The study conducted by Frontier demonstrates that Emirates’ presence in 28 European cities significantly contributes to regional development, especially in non-hub markets that have traditionally been overlooked by other carriers.

"Some of Emirates’ competitors have in the past accused the airline of having a negative impact on Europe, but the Frontier analysis paints a different picture. Our research shows that the direct, indirect and induced impact of Emirates’ operations and the development of connectivity to secondary cities in particular, makes a substantial contribution to the EU GDP", stated Dan Elliott, founder and Director of Frontier Economics. "The economic value this connectivity brings to the EU is at times underappreciated, and something that merits attention."

The Value of Connectivity

Traditionally, international travel from Europe involved flying from or often backtracking to one of the big European hubs. This contributed to a connectivity gap for other major European cities, restricting their ability to develop trade and foreign direct investment (FDI) opportunities. Since launching services to Europe in 1987, Emirates has helped bridge this gap, by gradually increasing services to major and secondary cities across the region.

The Frontier analysis, which covers 28 cities served by Emirates in 16 EU Member States, identified a total of 220 routes from Europe that are unique to Emirates. 21 of these are non-stop connections from European cities to Dubai, and the remaining 199 routes are unique one-stop connections via Dubai. Using any other airline or alliance on these unique routes would require at least one more stop.

"The connectivity Emirates provides through these 220 unique routes positively impacts FDI and trade, as well as the development of regional centres. It also increases tourism, provides choice for consumers and supports air cargo shipments to and from regional centres", commented Dan Elliott. "We estimate that an additional 3,000 jobs are facilitated through the catalytic impact of the 220 unique connections, equivalent to €215m of GDP, taking Emirates’ total contribution to €6.8 billion."

Considering the breadth of Emirates’ network and how air travel demand is expected to double in the next 5-10 years, Emirates is well positioned to bring a growing number of tourists and business travellers to Europe, further enabling trade and investment.

With a total of 140 aircraft ordered, Emirates is the largest purchaser of Airbus’ A380, accounting for more than 40% of the total A380 order book. In 2013 Airbus delivered 13 A380s to Emirates which represented 50% of the total deliveries that year. Whilst Emirates has been operating A380s for 6 years, after placing the original order more than 13 years ago, the employment generation in Frontier’s analysis is only calculated for 2013. These numbers can be projected for the duration of the delivery schedule.

Airbus estimates that Emirates’ A380 orders support the employment of 41,000 direct, indirect and induced jobs in Europe. About 70% of these jobs are split equally between France and Germany, with the UK having 17% and Spain 13%. These are high-skilled jobs that impact a high-value supply chain, creating a significant multiplier effect in countries where Airbus has aircraft production facilities.

To read more about Emirates’ economic impact in the EU, please visit http://www.emirates.com/english/about/int-and-gov-affairs/publications/economic-impact-studies.aspx

*Including Emirates’ operations and the catalytic impact of the 220 unique connections it offers.

Emirates’ Operations in Europe: A €6.8 Billion Impact on GDP