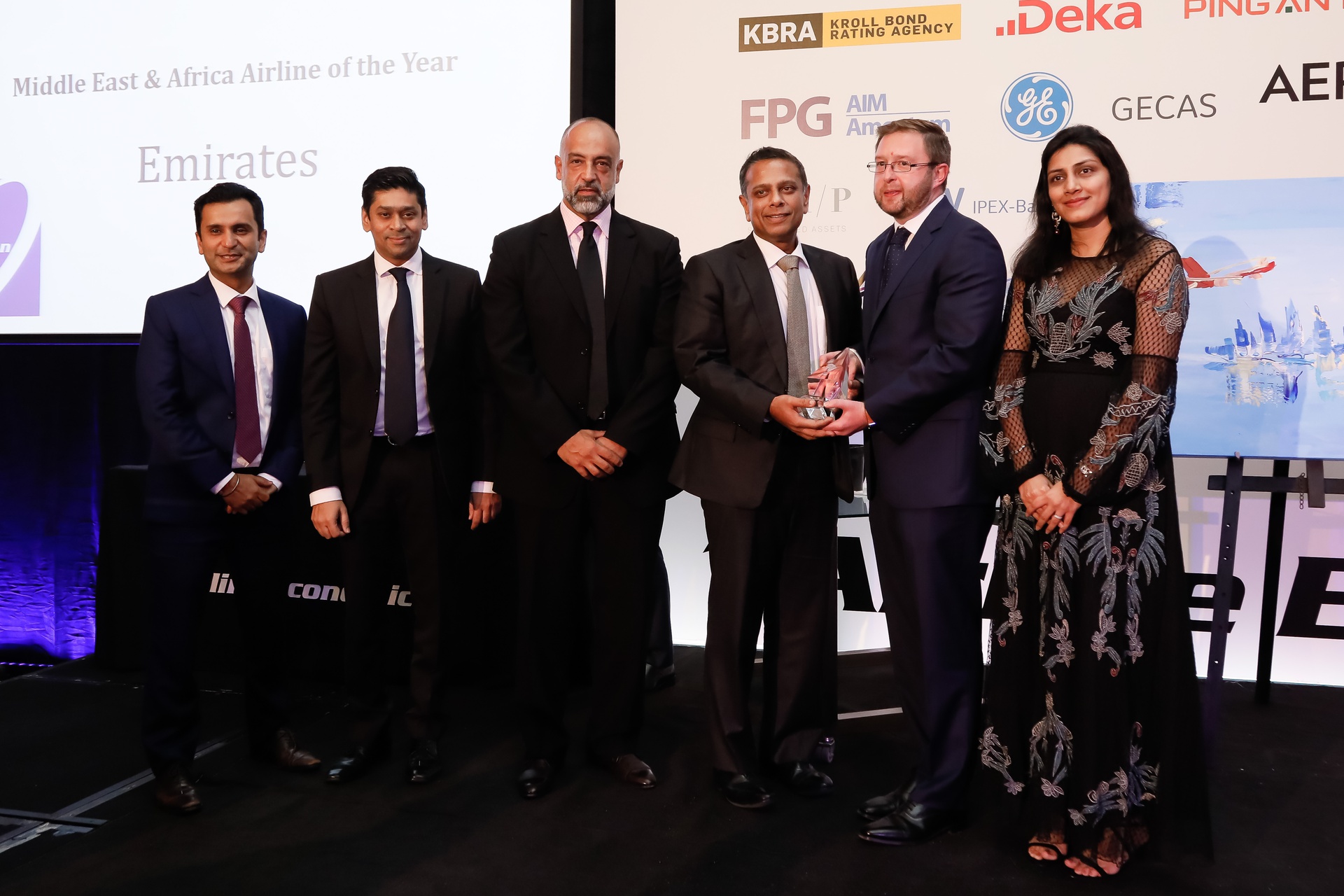 Dubai, UAE - 4 October 2018: Emirates, the world’s largest international airline, has won the Aviation 100 ‘Middle East & Africa Airline of the Year’, awarded by Airline Economics magazine. The Aviation 100 awards recognise aviation’s most outstanding performers, as well as the most innovative and successful finance and leasing deals closed in the last 12 months. The awards were held during the Airline Economics Growth Frontiers Dubai 2018 conference gala dinner.

Emirates and its financing partners also won ‘Deal of the Year for Innovation’, which resulted from a leasing transaction of five Airbus A380s. Nirmal Govindadas, Senior Vice President Corporate Treasury received both awards on behalf of Emirates earlier this week.

Winners of the Aviation 100 awards are decided by an industry-wide survey, a rigorous vetting process and editorial consideration. The Emirates Aviation 100 ‘Airline of the Year’ accolade was won based on the airline’s financial and revenue per passenger kilometres (RPK) performance, aircraft orders, as well as network and fleet expansion activity.

In the 2017-18 financial year, Emirates delivered a solid performance, increasing its revenue to AED 92.3 billion (US$25.2 billion), and posting a profit of AED 2.8 billion (US$762 million).  The airline carried more than 58 million passengers and 2.6 million tonnes of cargo. In 2017, Emirates also clocked in 289 million scheduled passenger kilometres flown (RPKMs). Emirates has progressively grown its network and today flies to over 160 destinations across 86 countries and territories, in addition to entering into several strategic partnerships, including an extensive codeshare with FlyDubai. Today, the codeshare partnership offers a combined network of over 200 unique destinations, providing more travel opportunities and connections for customers. The airline will remain focused on stimulating customer demand, while delivering a great experience on-board a fleet that is among the youngest in the industry.

Emirates also made global headlines with two significant commitments for new aircraft in the last year. At the 2017 Dubai Airshow, the airline announced a US $15.1 billion agreement for 40 Boeing 787-10 Dreamliners, with delivery commencing in 2022. In early 2018, Emirates reinforced its commitment to the Airbus A380 programme with a US $16 billion deal for an additional 36 aircraft. The airline remains the world’s largest operator of the Boeing 777 and A380, and the orders made in the past year underline Emirates’ commitment to operating a wide-body fleet of aircraft that allows for continuous product enhancements and innovations.

In the last twelve months, the airline has also proved that it was an industry trendsetter when it comes to product innovations, when it revealed its new Boeing 777-300ER game-changing fully enclosed 40 square feet private suites. The new B777 First Class private suites showcased the latest in cutting-edge onboard technologies, including a NASA inspired ‘zero-gravity’ seating position, ‘virtual windows’ for middle aisle suites, and a personal video-call service, along with unique lighting and climate control features. The Emirates Boeing 777-200LR fleet also underwent a renovation with a new Business Class cabin featuring a configuration with wider seats in a 2-2-2 layout. Emirates’ new A380 OnBoard Lounge has also debuted with a revamped look, more seating options, mood lighting, and other technological features.