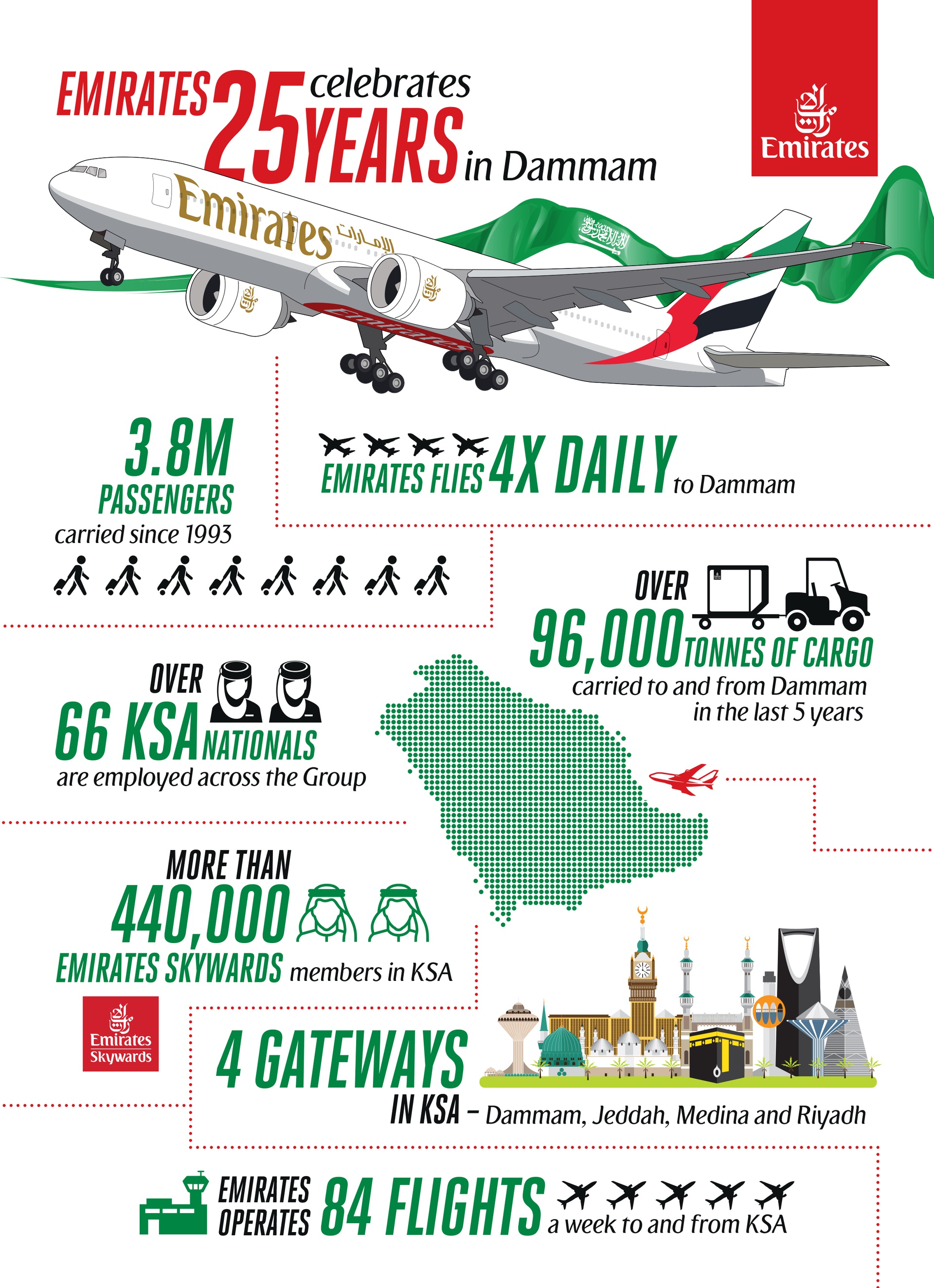 Emirates, the world’s largest international airline, is celebrating its 25th anniversary to Dammam.

DUBAI, UAE: 1 May 2018 –Emirates, the world’s largest international airline, is celebrating its 25th anniversary to Dammam. Originally operating two flights a week, Emirates now flies four times daily between Dammam and Emirates’ hub in Dubai. Since the start of the Dammam service in 1993, the airline has carried more than 3.8 million passengers.

Adil Al Ghaith, Senior Vice President, Gulf Middle East and Iran for Emirates said: "We are embarking on a real milestone as we celebrate 25 years of service to Dammam.  The Kingdom of Saudi Arabia is a major market for Emirates and we take great pride in the role we play in providing global connectivity both for business and leisure passengers in Dammam and in the Eastern Province of KSA. We remain committed to this market and look forward to continue working closely with our industry partners in KSA to provide the best possible services to our customers.”

The Emirates team in Dammam has grown to over 14 employees, while over 66 Saudi Arabian nationals are employed across the Group.

Emirates SkyCargo, has carried almost 96,000 tonnes of cargo to and from Dammam and the Eastern Province in the last five years, carrying goods such as fresh fruits and vegetables, fish, meat, machinery and equipment.  The airline plays an important role in fueling trade between Saudi Arabia and the UAE, currently estimated at US $19.5 billion in 2016, according to the UAE Ministry of Economy. Emirates has also enabled local exporters and businesses to connect to both developed and emerging markets in the airline’s network of key trade and commerce hubs. Emirates’ popular loyalty programme, Emirates Skywards, focuses on bringing its Saudi members value, choice and flexibility. Today, more than 440,000 Saudi nationals and residents are enrolled in the programme, benefitting from rewards flights, hotel stays as well as retail and lifestyle experiences supported by the airline.

Emirates serves 48 international destinations with the world’s largest passenger jet aircraft, the Emirates A380.  In February 2010, Emirates became the first foreign carrier to offer a scheduled A380 service to the Kingdom of Saudi Arabia, deploying its flagship double-decker to Jeddah. Emirates has also flown one-off missions to Riyadh and Medina. Emirates passengers flying to and from Dammam enjoy up to 20MB complimentary on-board Wi-Fi, generous baggage allowances and up to 3,500 channels on Emirates’ award-winning inflight entertainment system ice.

Emirates has been a part of the Kingdom of Saudi Arabia’s skies, cities and communities since 1989.  The airline currently offers 12 daily nonstop flights from four Saudi Arabian airports to Dubai where passengers can connect to a network of 159 destinations in 85 countries. In addition to its four times a day daily Dammam service, Emirates currently flies three times daily from Riyadh, three times a day from Jeddah and serves Al Medina Al Munawarah with two daily flights. In total, Emirates operates 84 passenger flights a week to and from The Kingdom of Saudi Arabia.