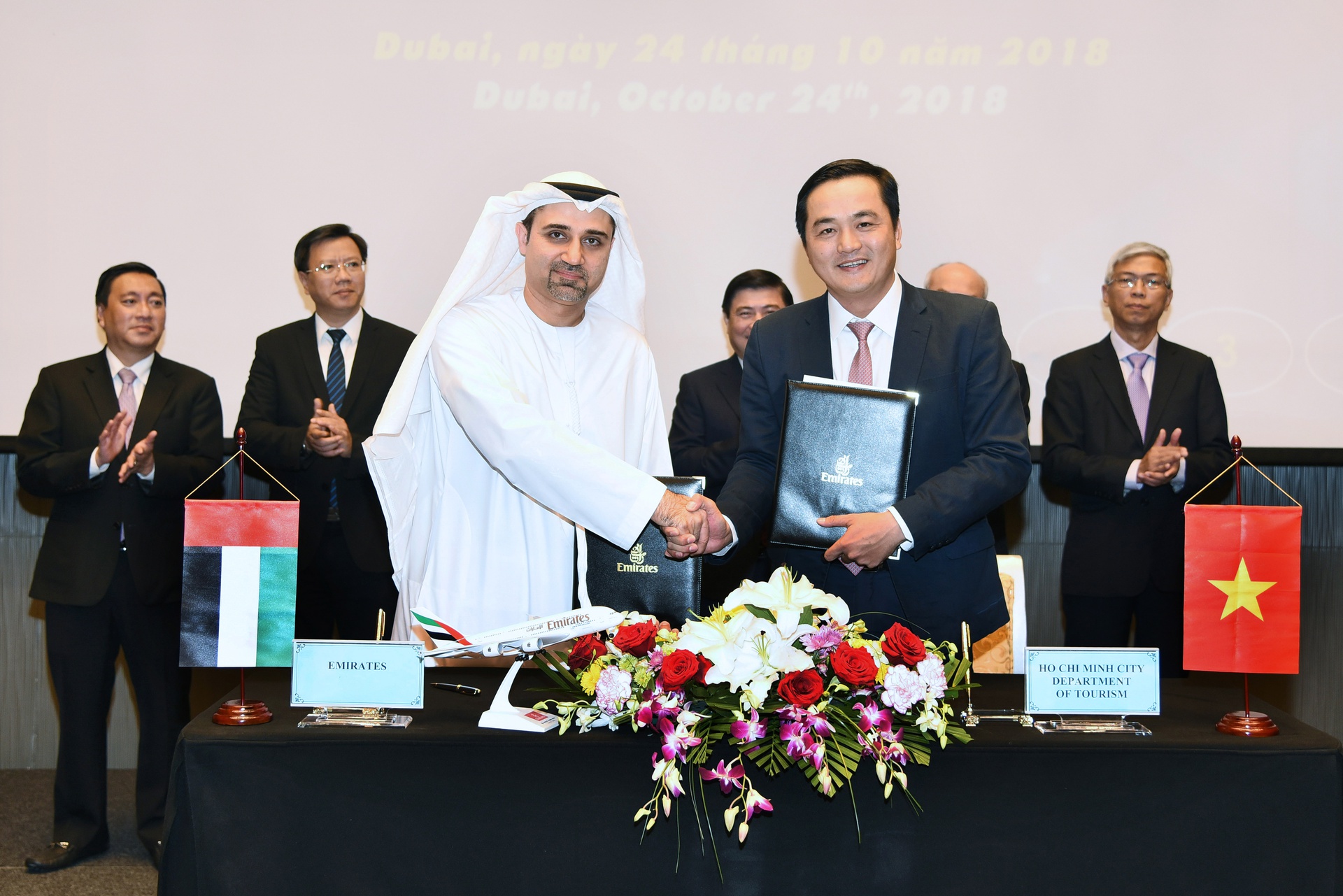 Dubai, UAE, 24 October 2018 – Emirates, the world’s largest international airline, has pledged its renewed commitment to supporting tourism into Vietnam and bilateral trade, with a special focus on Ho Chi Minh City, by signing global marketing agreements to promote tourism to the city from the United Arab Emirates and encouraging trade and investment.

Commenting on the signing of the MoUs, Badr Abbas, SVP - Commercial Operations for Far East, Emirates said, “Vietnam is a very important destination within Emirates’ network and we are pleased to collaborate on joint promotional activities that will leverage the route’s success and increase passenger traffic to Ho Chi Minh City. With the aim of creating more demand for travel to Ho Chi Minh City, we look forward to partnering with both tourism bodies to showcase the city’s offerings as a tourist destination and key business hub. Through a dynamic joint programme to include promotional events, roadshows and tourism exchanges, Emirates hopes to make a significant contribution to boosting tourism and trade in Vietnam.“

“Emirates has enjoyed tremendous success in its operations in Vietnam with non-stop daily flights from Dubai to both Ho Chi Minh City and Hanoi. Since we launched our service to Ho Chi Minh City in 2012, Emirates has carried more than 1.25 million passengers on the route. Dubai is one of the top five destinations from Ho Chi Minh City and we hope to mirror this success and establish Dubai as a significant contributor to passenger arrivals and tourist numbers to Vietnam,” he added.

Commenting on the long-standing relationship with Emirates that underpinned these new agreements, Mr. Le Phuong, Commercial Counsellor – Head of Vietnam Trade Office in UAE said: “Emirates is already an important facilitator of international tourism to Vietnam, bringing in a significant portion of the nearly 13,000,000 international visitors welcomed to Vietnam in 2017. Besides, Emirates is also the effective and efficient channel for the transportation of the fresh fruits and vegetables of Viet Nam to reach and penetrate into the UAE market and other countries in Middle East and Africa. We wish to expand in promising markets like the UAE and attract more visitors by showcasing exceptional tourism offerings and have found, in Emirates, the ideal partner to achieve this.”

“With the signing of this MoU we wish to strengthen our partnership in both the trade and tourism sectors and explore new collaborations that will be mutually beneficial to both Emirates and Ho Chi Minh City, Vietnam. We would also like to express our commitment to the airline and extend our support to ensure its continuous success in serving the destination,” continued Mr. Le Phuong.

The Agreement will see promotional activities such as attendance of tourism trade shows and fairs, trade familiarisation trips, product presentations and workshops, amongst others, be undertaken jointly by Emirates and the relevant boards in Ho Chi Minh City.

Emirates SkyCargo, the freight division of Emirates and ITPC will explore opportunities to promote trade to and from Vietnam. Emirates SkyCargo has already played a key role in strengthening trade links between Vietnam and the rest of the world. In the last financial year alone, the carrier transported a total of close to 50,000 tonnes of Vietnamese exports and imports - an increase of 21% from the previous year. With its global network, Emirates SkyCargo has created new markets for Vietnamese exporters. In 2017 the air cargo carrier facilitated a near fivefold increase in the volumes of exports of fresh fruits and vegetables such as rambutans, mangoes and lychees from Vietnam to Dubai.

In addition to the daily service to Ho Chi Minh City since 2012, Emirates also launched its daily service to Hanoi with a stopover in Yangon in 2016, which became a direct flight between Dubai and Hanoi, one year later. The daily services to both Vietnamese cities are operated by Boeing 777-300ER aircraft in 2-class configurations, with an overall capacity of 5,992 seats per week between Economy and Business Class.

Emirates SkyCargo began its operations in Vietnam in 2008 and currently offers a weekly cargo capacity of over 1,400 tonnes on its freighter and passenger services to Ho Chi Minh and Hanoi for Vietnamese customers.

Emirates has a fleet of 270 aircraft and flies to 162 destinations in 86 countries and territories across six continents.