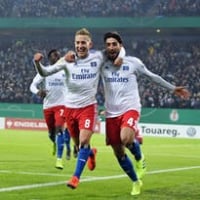 Six-time German national champions Hamburger SV is one of the oldest sports clubs in Germany and one of its most successful. From Bundesliga’s founding in 1963 until 2018, Hamburg SV has had the distinction of being the only team that has consistently played in the top tier of the German football league. The team calls the Volksparkstadion in Bahrenfeld, western Hamburg their home and enjoys a large following as one of the 20 biggest sports clubs in the world.

Our partnership with the club starting from 2006 highlights our ongoing loyalty to Germany and to sports around the world. In addition to being the football club's main shirt sponsor, our most recent agreement includes prominent branding at Volksparkstadion, previously known as Imtech Arena, as well as promotional and hospitality rights until June 2022.